Check out our comprehensive guide to Globe Life Field, the Texas Rangers new stadium – written by a Rangers season ticket holder family. As avid baseball travelers, we’ve seen the good and bad in different ballparks. However, the air-conditioned new home of the Rangers is a winner.

The bag and “bring-in” policy at Globe Life Field, like at many other stadiums, has changed and is subject to further change as a result of the pandemic. Please check back here as the policy is finalized.

Tailgating is USUALLY allowed in most of the parking lots around Globe Life Field, but WILL NOT BE ALLOWED DURING IN OFFICIAL RANGERS LOTS in 2021. Private lots are available on the East side of the stadium, and operate under their own tailgate rules.

The tailgate scene on Opening Day is ranges between “active” and raucous…similar to Dallas Cowboys games. The celebration begins up to 7 hours before game time in the lots at Six Flags and businesses in the area. The private lots around Globe Life Field have some of the best tailgating spots, with grass and shade.

Texas Live! has now become the epicenter for the pre-game party for most games these days. Located just beyond the left field gate, the structure houses nearly a dozen restaurants and several more drink stands. Live music, big screens, giant Jenga, and locally inspired foods (BBQ and Tex-Mex) flow seamlessly inside and out. Be sure to check out the Baseballism store while there for some unique baseball-themed apparel and gifts.

If you’re looking for Texas BBQ (if you’re not, you should be!), Lockhart Smokehouse serves some of the best in the Metroplex. Get in line, choose your meat (like brisket, chicken, or sausage) and quantity (sold by the 1/4 lb), and watch them slice/dice it up in front of you. Of course, you’ll need something to wash that deliciousness down with.

Like most other teams, each season brings along new food options at the ballpark – it’s almost a sport within itself.

While we’ve been able to attend a World Series game at Globe Life Field, this section is still under development. We sat in Left Field section 232 and had a solid view to the game. We look forward to researching the ballpark during the 2021 season as we attend several games and sit in various spots throughout the park.

As of the publishing of the Globe Life Field Guide, there’s a pandemic underway, so autographs are not allowed. However, these were the policies in place before the pandemic hit – and hopefully these opportunities return when we get back to the “old normal”.

Ranger autographs: Netting will span the lower deck infield and foul territories, from section 1 to section 26, making it difficult to get autographs from the players after warmups. However, the Rangers have a few events weekly where fans can get autographs:

Visitors autographs: While netting will protect the sections around the visitors dugout, there are 2 sections that sit right above the bullpen – sections 27 and 28 – see seating chart. While you’re elevated from the players in the bullpen, some may be willing to sign a baseball and toss it up. However, players are less likely to sign autographs once the game starts.

Getting to Globe Life Field

The DFW area is one of the more sprawled out areas in the United States. DFW airport, as well as Globe Life Field and the Arlington Entertainment Complex sit between downtown Dallas and downtown Ft. Worth. Due to a lack of good public transit, renting a car or Uber-ing will be necessary.

Getting from DFW airport to the stadium isn’t difficult, but public transportation is not available. The stadium is 10-20 minutes south of DFW airport. If you plan to spend your time in the area around the stadium, an Uber makes the most sense. If you’re flying into Love Field or plan on exploring other parts of the Metroplex (see attractions below) then renting a car makes more sense. Most hotels (other than Live! by Loews) offer free parking.

There is plenty of parking onsite, directly through the Rangers, as well as private lots in the vicinity. You can save a few bucks by walking a few extra blocks and booking parking online before heading into Globe Life Field.

There are a number of hotels in the area surrounding the Rangers new stadium, including Live! by Loews, which is nearly attached to Globe Life Field and opened in 2019. The city of Arlington operates a few trolley routes, which make some more affordable options easily accessible to the stadium. aLoft is our favorite among these, and is also recently constructed. Be sure to read our full coverage on hotels options around Globe Life Field.

Not a complete strikeout, but definitely behind in the count: The beer list at Globe Life Field consists of 40-50 offerings…but most of them are uninspired “macro-brews”, many from the Budweiser family. It’s a missed opportunity to showcase some of the great beers of north Texas.

Among the local breweries represented at the Rangers new stadium are 4 Corners (from Dallas), Nine Band (Allen), Legal Draft (Arlington), Rahr & Sons (Ft. Worth) and Bishop Cider (Dallas). Other Texas offerings include Shiner Bock (from the town of Shiner) and Karbach (from rival-town Houston, of all places). Ziegenbock is brewed by Anheuser-Busch and distributed only in Texas and vicinity, and branded as a “Texas beer”…so take that for what it’s worth. The distributor will also mix in a rotating beer from time to time – no telling what that will be.

Of those listed, the Four Corners Local Buzz and Rahr Blonde rank among our favorites. Of course, with Legal Draft located just a mile away, you may just want to stop in there and try their beers for a more reasonable price.

Rangers themed beers: Although not from the DFW area, Karbach has brewed a Globe Life Field-themed beer called Sky Porch Ale, which is a strawberry blonde with notes of honey and lemongrass. Also, Nine Band’s 13 Gold, a Ivan “Pudge” Rodriguez-inspired golden ale will also be available at the Rangers new stadium.

Beer and Baseball. To many of us, the two go hand-in-hand. No Globe Life Field visitor’s guide could be complete without a discussion on the micro-breweries in the area around the Rangers new stadium!

There are 3 craft breweries located in Arlington, Texas, with over 50 others located throughout the DFW Metroplex. In downtown Arlington, less than a 5 minute drive from Globe Life Field, you’ll find both Legal Draft Beer Company and Division Brewing. Both offer a good selection of quality beers.

Division Brewing is Arlington’s first locally owned and operated brewery prides themselves on quality, creativity, and variety. They usually have 15-20 beers on tap, all brewed onsite in small batches. The taproom is low-frills, but has garage doors and a patio with shade to enjoy the Texas weather. The staff is friendly & knowledgeable, and there are enough interesting/unique beers on tap that a flight (maybe 2) is your best option. Beers range from blondes and IPAs, to stouts and sours. You’ll be hard-pressed to find Division’s beers in local distribution, but they sell beer to go in the taproom.

Legal Draft is located in a bright, airy, spacious building, with a nice patio and garage doors. They offer a wide range of beers ranging from 4.2% ABV up to seasonals that check in over 10%. Many of those on tap are year-round, and can be found a bit more easily in distribution around town. Located across the railroad tracks from Division Brewing, they often have food trucks and are located near a number of restaurants.

Revolver Brewing BLDG 5 Brewery and Taproom – next to the stadium

Revolver Brewing of Granbury, Texas has opened a brewpub/outpost at Texas Live!, right next to the Rangers new stadium. “Revolver Brewing BLDG 5 Brewery and Taproom” opened in February 2020. There’s a small-batch pilot brewing system on site, brewing up experimental offerings. Their well-known and widely distributed beers, such as Blood and Honey, are also available on tap.

Other Places to Visit When in Arlington Texas

Of course, with the evolving pandemic situation, please be sure to check directly with each of these recommended locales on their current policies.

The Six Flags Over Texas amusement park is located in the shadows of the old ballpark, and hard to miss with the towering roller coasters and other thrill rides. More popular rides include the Titan roller coaster – which reaches 85 mph, and MR. FREEZE: Reverse Blast, which launches you backward around the tracks and up a 246 ft incline, then reverses course and returns you to the station facing forward. In addition to roller coasters, there’s a mix of rides appropriate for the entire family.

Hurricane Harbor is a water park just across the interstate from Globe Life Field. While it’s part of the Six Flags network of amusement parks, it’s not physically connected to Six Flags Over Texas (Interstate 20 runs right between them). It’s a great place to spend the day and cool off from the Texas summer heat. Attendance is lightest during the work week, so you can spend the day there then catch a mid-week Rangers game.

Whether you love the Dallas Cowboys, or hate them, there’s no denying that AT&T Stadium is one of the best. On the tour, you’ll see a suite, exclusive clubs, the players and cheerleaders locker rooms, and even step onto the field. More information and tickets are available from the stadium site.

You can see Texas League baseball without leaving the DFW metroplex. The Roughriders are the AA affiliate of the Rangers, and play in one of MiLB’s best and most unique ballparks. Opened in 2003, it’s located about an hour from Arlington (depending on traffic) in the Plano/Frisco area. There are plenty of affordable hotels, bars, and restaurants located right around the stadium.

Pro tip: avoid seats down the first base/right field line – you’ll be looking directly into the sunset for the first few innings.

“Where the West begins”. If you’re expecting to see 10 gallon hats and boots when you come to Texas, you may be disappointed. The DFW area is very urban and modern – more comparable to LA than the old west. However, Ft. Worth has a distinct western flair. Every day at 11:30 and 4pm – depending on weather – there’s a cattle drive on East Exchange Street in the Ft. Worth Stockyards. The Stockyards neighborhood – north of downtown, is also a great place to shop for western wear, hand-made leather goods, and other cowboy and cowgirl necessities. It’s worth the trip for the cattle and people watching, but I suspect you may end up leaving with a big-ass belt buckle!

Highly recommended by the “Visitors Guide to Globe Life Field”, the Sixth Floor Museum at Dealey Plaza in downtown Dallas offers a poignant view into one of the darkest days in the city’s (and America’s) history. Even for those who weren’t alive when JFK was assassinated – or for those who typically like museums or history – this museum is well worth the visit. Be prepared to relive the emotions that took over America that weekend in 1963.

Located about an hour north east of Arlington, fans of the 80’s TV show Dallas! will instantly recognize Southfork Ranch. Fans from around the world (few under the age of 45) still visit the world’s most famous ranch, as tours are available daily.

Steve Novak is a corporate quant jock by day, and freelance writer and founder of Sports Infotainment, LLC in his spare time. His opinions are just that - however, probably based in a lot of analytics. He can be reached at SteveN@bestballparkseats.com 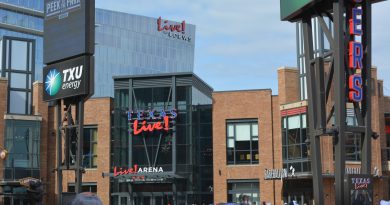 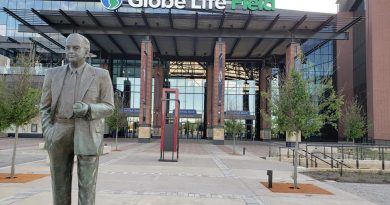 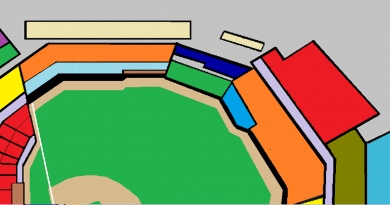