Many fans dream of catching a baseball at an MLB game. Several fans have gone to hundreds of games, and never gotten one. I was probably in the same boat, but eventually my luck changed, and I’ve now gotten several. I’m no Zack Hample – not even close – but I have my share.

Sure, call me Captain Obvious – but your chances increase if you have a glove. <humblebrag> While I once barehanded a foul ball at a minor league game (it only stung a little), it was a double-A foul ball. </humblebrag> When Aaron Judge crushes a ball towards you at over 100 MPH, trust me – you’re going to want a glove. It also gives you a larger catch radius – and an advantage over the guy that’s too cool to bring his glove to the ballgame.

Tip 2 – Arrive to the Ballpark Early

Gate opening times vary by stadium (be sure to read our team guides from the menu above), but generally open 1.5 to 2 hours before first pitch. Again, this varies by stadium and by day of the week. This means that you’ll most likely see the visiting team taking batting practice.

NOTE: Most teams do not take batting practice before Sunday afternoon games.

If you’re among the first to arrive in the stadium, check in aisles and under the seats in the outfield seating areas…since batting practice has been going on for a while, there may be a few unclaimed baseballs waiting for you!

Tip 3 – Stand on the Aisle During Batting Practice

Standing on the aisle may be the best kept secret tip of them all. Why is this important?

Standing on the aisle increases your chances of getting to a ball at least ten-fold.

There are a few reasons that it would be advantageous to know a little (a lot is better) about the visiting team.

First, most likely, it’s the visitors that you’ll see taking batting practice when you show up. It would be beneficial to know who the power hitters on the team are. Is the lineup right-handed heavy, or lefty heavy? Righties will put more balls into the left field stands, lefties will hit it out to right, generally. (Of course, Miguel Cabrera of the Tigers takes pride in hitting them out, in order, “around the world” – starting in right field and working his way around to left).

The second reason to know the opposing team, particularly the pitching staff, is that they are the ones that will be shagging the batting practice balls that don’t make it out. While they don’t throw every near-miss up into the stands, they will throw a good amount. You’ll need to get their attention, though, and it is more respectful if you can call them by name, rather than “Hey 52! Throw it here!” Batting practice jerseys typically don’t have names on the back, so knowing the opponents roster by name/number (or buying the program on the way in) would be advantageous.

FREE BONUS TIP 4.1 – Buy the game program on the way in to the ballpark if you don’t know the opponents by name/number so you can address them properly when begging for a baseball.

Each of our ballpark guides for the individual stadiums provides tips such as gate opening times, and the sections that provide the best chance for getting a ball. Some stadiums have long fences, stiff breezes, or just more competition for balls in certain areas. We try to sift through that. Of course, some of those factors will change from night to night, but showing up armed with the above tips, we like your chances!

Here are just a few of our guides:

If you happen to read this and you end up catching a ball, we’d love to hear from you!

Steve Novak is a corporate quant jock by day, and freelance writer and founder of Sports Infotainment, LLC in his spare time. His opinions are just that - however, probably based in a lot of analytics. He can be reached at SteveN@bestballparkseats.com 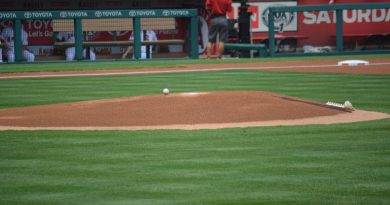